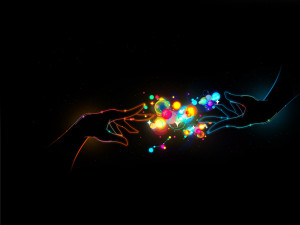 Ideas are cultivated upon ideas, and human beings are catalogs of timeless ideas.

Most humans, before their conception, are an idea themselves– imagined, perhaps dreamed about, and talked about– the product of dotting parents-to-be who chose to create a new life. Those dotting parents functioned on the ideas, the beliefs, the morals– the collective consciousness, and everything they have ever experienced, to support the idea of having a child– as did their parents and their parents before. The collection of particular ideas drive ever-more toward the proliferation of our species and its evolution.

Much like the process of DNA replication, ideas implant into existing frameworks and venture through ongoing channels in the mind– they are then re-birthed with every new generation. Mirroring neurons and the internet allow for a faster transplant of popular and beneficial ideas to human beings. Unlike our cephalopod friends, whose mothers die shortly after they arrive into their watery home, we humans live long enough to build and expand on our knowledge through the efficient transfer of information. The human being as an idea unto itself, morphs as it lives its life– it collects ideas, and eventually spreads the ideas of itself, and the ideas of others. Sometimes, the human being as an idea, is even immortalized and emulated.

The ongoing pattern of accumulating data is what we human beings use to survive and architect existence. When ideas take up reputation, they integrate into what we see in the world, and what we understand to be reality– they dictate how we function.

Ideas integrate into human consciousness and survive based on need. The collective consciousness is the history of the catalogs of ideas we humans have chosen to archive indefinitely.

The idea of a collective consciousness is brought on by shared beliefs centered on specific ideas, and is our collective conscience– it serves as a unifying force– a reminder to our species that alone, we cannot flourish.

Perhaps a message can be found in the lyrics of that old Jamie Carr song:

Only different people saying, the same things were were saying, when we talked. And dreams are still made of all the things dreams are made of, and never finding happiness is still what everybody is afraid of.

Ideas seem to behave like an ongoing fractal pattern– looping in and out like roots, or neural connections in the brain– they seem to hop around in the minds of things, and long after generations retire, linger on, as though they were a watermark of a species’ will to survive.

Sometimes I entertain the idea of whether the universe itself might be conscious– of course, I have no way of knowing– but it’s fun to think about whether we, as catalogs of ideas, are a way for the universe to extrapolate data on itself… and yet, I must keep in mind the words of the great Richard P. Feynman:

The first principle is that you must not fool yourself and you are the easiest person to fool.

Cheers to the archiving of timeless ideas.