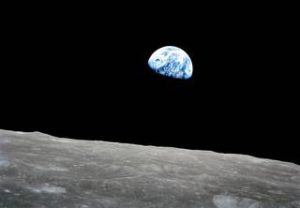 The Earth is a beautiful specimen of nature– housing billions of organisms, sights, and sounds, it demands our attention for nurture and awareness.

The Earth is a cosmic entity, and its inhabitants vary. Forms range from the infinitesimal to the gargantuan– from the tiny tardigrades to the awestruck lengths of the Redwoods along the coast of California. Humans outweigh the other species in their impact on the environment, and consequently affect the existence of all life forms. With a greater capacity for shaping our world, the human species is beckoned to assume responsibility in all ways it is capable.

Everything that has ever existed, and exists today, has led to the carving of a space on Earth for humans. One might say, that it is therefore, the responsibility of the human being to evolve in order to protect and nourish the very home– the very pathways, that brought it to flourish.

Looking out into the Cosmos is as revealing as looking within, suddenly one begins to understand that there is no separation of the “things” that exist. Everything that ever was and is, is a product of nature’s morphology.

When one looks upon the Cosmos, every-which-way one looks, one sees only a slice of the greater heavens. Despite humanity’s greatest instruments, it sits from a minute vantage point against the darkness of infinity. As far as the human species knows, there is only one planet capable of harboring  life, Earth. Humans remain Earth-bound explorers whose longevity is dependent on the ability to preserve nature.

At times, one finds oneself like the eight-week old child, glimpsing the greater reality for the very first time.

Those who happen to glance up at the sky, suddenly may find themselves in earnest curiosity, seeing the Earth with new eyes. Perceptions are known to shift when human beings contemplate the glittering stars before them. Thoughts of the most beautiful kind, may spring forth, and in humble nature, to extrapolate the delicate reality of existence– that much of what is seen, is indeed a great cosmic mystery.

To Develop a Cosmic Awareness:

Taking the time to observe reality, transforms consciousness in ways books and t.v. cannot. One may gain insight in recalling, that some of the greatest artists, spent copious amounts of their time reflecting on the history and ever-changing composition of the Earth and the Universe of things.

A greater awareness is necessary to nurture Earth– the amazing little planet which, as far as one can tell, is a rarity.

The Universe is a Great Symphony, and we Humans, simply hear the Music.

This post is dedicated to the Drifters and the Dreamers, and the “Curiouser and Curiouser”– the Humanists, the Cosmonauts, the Psychonauts, the Scientists– the Humans.